The 2019 Georgia Legislative Session has officially convened, and our legislative liaison Scott Maxwell has issued his first legislative report of the new year. He’ll be following public health issues throughout the session, and we’ll post his reports here and on our Health Policy page each week. 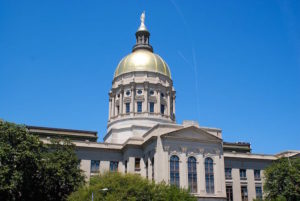 On his 4th day on the job, Gov. Brian Kemp delivered his first state of the state address at the Capitol. In it he announced that his budget proposal includes a 2% raise for state employees and a $3,000 raise for public school teachers. He called the teacher raise a substantial down payment on his campaign promise to raise teacher salaries by $5,000. The Governor also wants to budget $1 million for the development of a waiver application to the federal government that would give Georgia greater flexibility to serve more people with Medicaid, without adopting complete expansion based solely on income.

The budget also calls for borrowing $100 million for bridge projects and $150 million for a new voting system for Georgia. Additionally, Kemp is requesting $8.4 million for mental health programs in high schools and one-time funding for of $69 million for school security — $30,000 for each of Georgia’s 2,294 public schools.