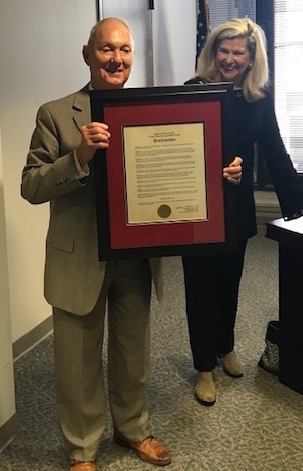 Former Commissioner Pat O’Neal, MD was honored recently for his many years of service to the Department of Public Health. Chairwoman Cindy Mercer, MD presented him with a framed proclamation on behalf of the Georgia Board of Health during its April meeting.

O’Neal is a nationally-recognized expert on emergency preparedness and response. A former flight surgeon in Vietnam, he practiced as an emergency room physician for 29 years before joining DPH.

Prior to being named Acting Commissioner in 2017, he served as Medical Director in the Office of EMS/Trauma. O’Neal is now serving as the Fulton County District Health Director.