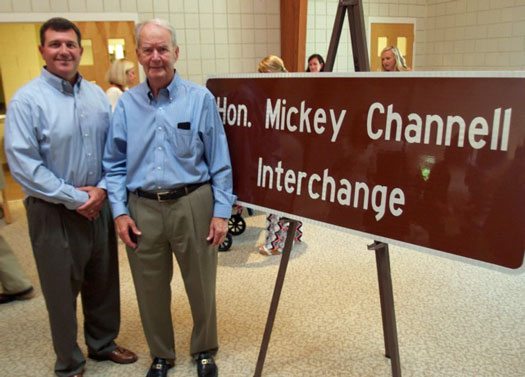 State Rep. Trey Rhodes (L) congratulates his predecessor, Mickey Channell, on the unveiling of a highway sign designating the intersection of I-20 and Ga. 44 as the “Hon. Mickey Channell Interchange.”

Former State Rep. Mickey Channell was honored last week in Greensboro at a ceremony featuring the unveiling of a Georgia Department of Transportation sign declaring the intersection of Interstate 20 and Georgia 44, the “Hon. Mickey Channell Interchange.”

The interchange is just south of downtown Greensboro, but the standing-room-only- event was held in the Family Life Center of the First United Methodist Church in Greensboro. A stage full of dignitaries — including Greensboro’s mayor, the Greene County Commission Chairman, state representatives, the District GDoT Board member, and a former house speaker — took their respective turns at the podium to pay homage to the now-retired representative who served for more than forty years in elected local and legislative positions. Channell’s House seat successor, Trey Rhodes, served as Master of Ceremonies.

Channell was lauded as a representative who did his homework and was able to get things done, although often quietly and behind the scenes. Local businessman Jamie Reynolds went down a list of items, such as traffic lights and airport improvements, that seemed to have occurred mysteriously . . . “until you learned Mickey Channell was involved.”

More than one speaker made note of Channell’s expertise in healthcare issues. Former House Speaker Terry Coleman said Channell became the “go to” person in the General Assembly when it came to difficult health and budget issues. Among other accomplishments, Channell is perhaps best known for being the father of the PeachCare program that ensures that children in Georgia have health insurance. He also introduced the bill to make the Department of Public Health a stand-alone agency.

While the district he represented morphed over the years, Channell represented parts or all of Oglethorpe County in the General Assembly from 1993 through 2014.

Channell expressed thanks to his family in particular, but also to colleagues, supporters and mentors for their help and encouragement over the years, a list that included a guy who went on to become governor — his political science professor and baseball coach at Young Harris College — Zell Miller.

Following the program, Rep. Channell, his wife and children, and his 96-year-old mother, gathered around to watch as his nine grandchildren helped unveil the highway sign. 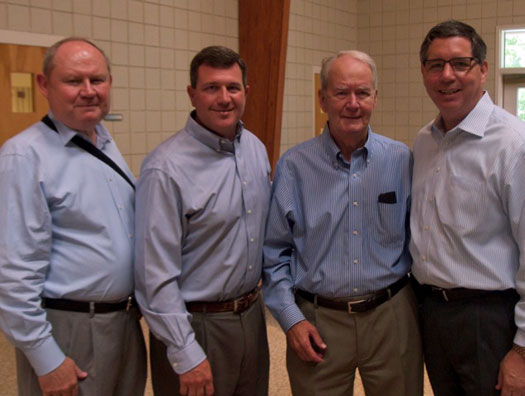 Terry Mathews, Rep. Trey Rhodes, former Rep. Mickey Channell and Scott Maxwell celebrate the unveiling of a sign designating the intersection of Ga. 44 and I-20 as the “Hon. Mickey Channell Interchange.”