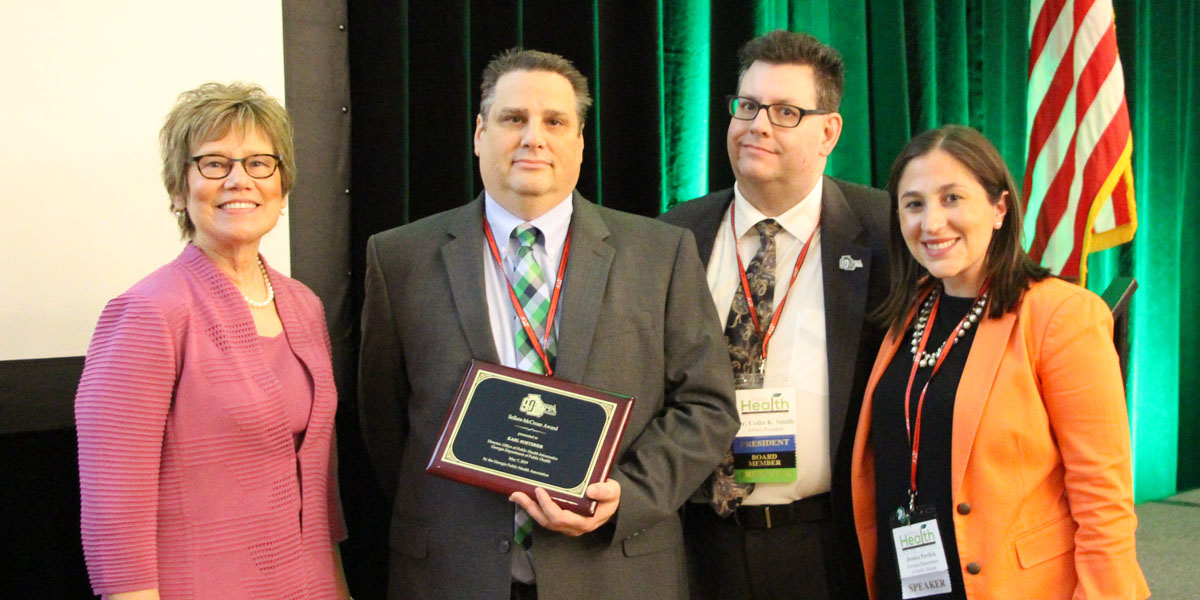 The Georgia Public Health Association awarded Karl Soetebier the prestigious Sellers-McCroan Award during at the 90th Annual GPHA Meeting and Conference on Tuesday, May 7. The award is given each year to a person whose work has had a significant impact on epidemiology and/or laboratory services in Georgia.

Karl has served as the technical lead for the Georgia Department of Public Health integrated disease surveillance system known as the State Electronic Notifiable Disease Surveillance System (SendSS) since 2003. The principal responsibilities of his position are to provide technical leadership to an 11-member development team and oversee the continued operation and development of SendSS with a focus on the integration and interoperability of data systems to support Electronic Laboratory Reporting and other data intensive facets of the notifiable disease and syndromic surveillance processes. Karl has held a large role in responding to emerging public health threats by coordinating and developing applications to support the data and information needs fo the epidemiologic response. These have included the 2017 Zika Virus response and the development of the Zika active monitoring system (ZAMS), the 2016 Ebola outbreak in West Africa that required the rapid development of a traveler monitoring system (EAMS), and the 2009 H1N1 influenza epidemic in Georgia. These efforts included rapid integration of new components and services to support epidemiologic data gathering, analysis and incident management efforts.

In his recently appointed new role as the Office of Public Health Informatics Director, Karl is overseeing development of Informatics initiatives, serving as the lead advisor to the GDPH Commissioner and leadership team regarding public health informatics, and ensuring that data and information are driving decision making of the department. Additionally, he is providing oversight of Medicaid Incentive Program (MIP) and Meaningful Use (MU) project initiatives.

Karl’s ability to bring together IT and public health science has profoundly impacted GDPH. When Karl develops new tools, he brainstorms how that tool can be used across the board. For example, the creation of EAMS for the Ebola response translated to the creation of ZAMS for the Zika response, and now aspects of that are being used in R-STaR.

Through Karl’s work improving existing DPH systems, both local and state epidemiologists have benefited with improved efficiency and analytic capability. By improving the foundation of epidemiologists’ IT infrastructure and in turn their response capability, the health of the state’s population has been impacted with the better prevention and control of infectious diseases. From investigating routine notifiable diseases to actively tracking those entering the state with an emerging infectious disease like Ebola, SendSS is the tool utilized in all this work and Karl has been instrumental in the entire process.