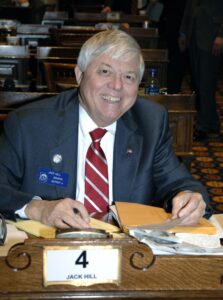 Georgia Senator Jack Hill, a Reidsville Republican, died Monday evening at his office. The Tattnall County Sheriff’s Office says his death is not believed to be related to the ongoing pandemic. Senator Hill was 75 years old.

As Chairman of the Senate Appropriations Committee, Senator Hill oversaw the funding of many public health initiatives and was named GPHA Legislator of the Year in 2010. A retired grocer, Senator Hill has served in the Georgia Senate since 1991.